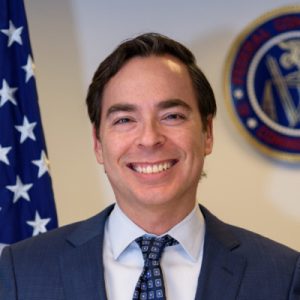 Chief of Staff & Senior Legal Advisor for Wireless and International

In addition to his duties as chief of staff to Commissioner Starks, Mr. Davenport also advises the Commissioner on wireless and international matters. Mr. Davenport has a long record of federal service, having served most of his career in the FCC’s Enforcement Bureau, beginning as a staff attorney then moving to management positions and ultimately serving as the Deputy Bureau Chief responsible for the Commission’s spectrum enforcement matters. Most recently, Mr. Davenport served as Senior Vice President, Federal Regulatory, for Ligado Networks. Earlier in his career, Mr. Davenport also worked at two DC-area law firms, specializing in litigation and communications issues. Mr. Davenport is a two-time co-chair of the Federal Communications Bar Association’s Enforcement Committee and a member of the Endorsements committee of the DC chapter of the National Hispanic Bar Association. Mr. Davenport is a graduate of Northwestern University and the University of Pennsylvania Law School.