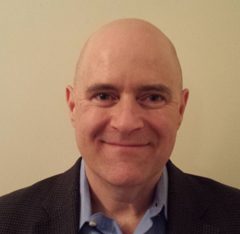 Paul Kirby is a senior editor at Wolters Kluwer’s TR Daily and Telecommunications Reports. He’s been with the company since 2000. Paul is an expert on wireless telecom policy issues and regularly moderates panel discussions at industry conferences and has frequently served as a guest co-host on “The Communicators” on C-SPAN, where he has interviewed company executives, trade association leaders, public advocates, FCC officials and other policy makers. Before joining TR, Paul worked for six years at Reuters, where he was a staffer on the wire service’s broadcast/online desk in Washington. Prior to joining Reuters, Paul covered Washington for Florida and Louisiana newspapers at States News Service, a regional wire service. Before that, he was a business reporter at the Gainesville (Fla.) Sun and a local government reporter at the Newport News (Va.) Daily Press. Paul is an alumnus of the University of Maryland at College Park, where he majored in journalism. He grew up in the Washington, D.C., area.